"You know about flowers, right~? They have something called a stamen and pistil, okay~?"
– Cinnamon, NEKOPARA Vol. 1 - Chapter 3

Cinnamon has periwinkle hair which is usually tied up into a high ponytail with a teal ribbon, which comes to about neck length, and when let down can reach past shoulder length. As a Scottish Fold, Cinnamon's ears naturally fold downwards rather than point up, and both her ears and her tail are the same color as her hair. She has amber eyes, and her silver bell is hung from a pink choker around her neck. She has the biggest bust in all the Minaduki catgirls.

Cinnamon's casual attire consists of a light blue and white magical girl dress complemented by matching knee-length white socks and pair of gloves with light purple frills on the hems. She wears pink shoes with matching ribbons on her chest and on her tail.

Cinnamon is among the most easygoing of the Minaduki catgirls. She is soft-spoken, polite, and cheerful. However as a kitten, Cinnamon was extremely shy to the point of hiding in the corner of her room and not speaking to anyone else, until Maple forcibly coerces her out of her shell. It is due to this that of all the Minaduki catgirls, Cinnamon is the closest to Maple.

Though she is often cheerful, Cinnamon at times has expressed hints of a low self esteem, forwardly offering herself as a catpanion to Kashou and settling for being the "least loved" of them all, and mentioning that her only redeeming feature were her big breasts while bra shopping. Despite this, Cinnamon's loyalty to Maple has shown her to be very selfless, fully supporting her dream of becoming a singer to the point of resorting to self-sacrifice, by taking on Maple's workloads at La Soleil, to see it come to fruition.

Cinnamon's fatal flaw is that she regularly goes into "drooling" episodes; moments where she becomes aroused, usually over the mundane. During these episodes she shows signs of being a masochist, expressing joy at being scolded by Kashou and being tied up with rope while on stage, and at times a sadist, teasing Kashou while bra shopping with her. She seems rather shameless about these episodes and they can occur at any time, including in public or in front of customers while working at La Soleil.

When Vanilla managed to slip out and send the card to Shigure that contained the necessary information about La Soleil's location, the rest of Minaduki household, including Cinnamon, visited Kashou's shop with haste. She appeared to be concerned after finding out about the sudden disappearance of Chocola, Vanilla and Kashou but was relieved when she saw them. After discussing how hard her bell test was and some arguments between the rest of the catgirls, Shigure and the rest of the crew rented out the shop and ate there, making them La Soleil's first official customers.

The next day, after Shigure's failed attempt to show Azuki's and Coconut's control of their instincts, Shigure then brought Cinnamon with Maple to "teach" Chocola and Vanilla about how to pass their bell exam but instead of teaching Vanilla how plants pollinate, Cinnamon ended up being aroused by her own simple explanation. Their way of studying seemed unconventional and not that effective, causing Kashou to have some doubts. Cinnamon then attempted to explain how insects reproduce but it still ended with her being aroused.

Shigure decided to reinforce La Soleil's staff by making the 4 other catgirls employees as well. Cinnamon officially became an employee of La Soleil since then.

Cinnamon played a more major role in this volume. Aside from getting aroused from things like getting wrapped in toilet paper and Coconut's skill at impressing Chocola and Vanilla, she also broke up a fight between Azuki and Maple. However, the two girls began to swat at her breasts, to which Cinnamon reveals that has happened before.

Cinnamon has a minor role in the game Nekopara Vol.2. She is one of the hardworking waitstaff of La Soleil. She is kind, polite, and a modest worker taking her responsibilities gently. But she's prone to finding something dirty to think about in just about any situation or conversation.

Cinnamon is the second heroine in Nekopara Vol. 3. She's kind and has a close relationship with Maple since kittenhood and still longs to support her. When Maple wants to achieve a dream that she had awhile ago, Cinnamon tries to figure out how to help her out in any way she could. 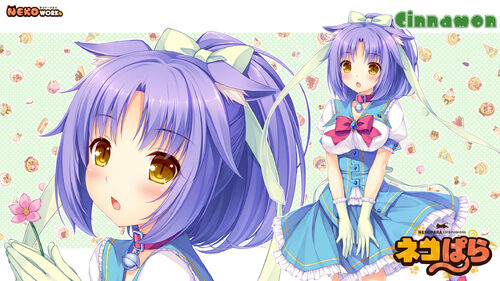 Retrieved from "https://nekopara.fandom.com/wiki/Cinnamon?oldid=13128"
Community content is available under CC-BY-SA unless otherwise noted.