Maple (メイプル Meipuru?) is a prideful, quick-thinking, and often arrogant catgirl. She loves the latest brand-name products and purrs only when she wants something from Shigure. She typically speaks frankly, yet remains attentive to those around her. She is, as the saying goes, a scaredy-cat, always turning on every light on the way to the bathroom at night. Out of all the catgirls, her tongue is the most sensitive to hot things.

Maple has orange, back-length wavy hair and her eyes are dark green. True to her breed as an American Curl, she has curled ears, and a matching fluffy tail.

Her standard attire consists of a brown headband in her hair, a ruffled buttoned white sleeved t-shirt covered with a brown waistcoat which appears to be plaid on the underside, a matching plaid skirt, with brown knee socks and black heeled slip-on shoes. She wears her gold bell around her neck adorned with a red ribbon.

Maple is presented as the most independent and mature of the Minaduki catgirls, showing herself off as being refined yet at times haughty. She is extremely prideful, although her pride has at times been her downfall, as shown when buying her first guitar with Kashou which required his intervention to rescue her from herself.

Maple appears to be more self aware and more ambitious than the other catgirls. In Vol 3 she reveals that she aspires to be a singer, although her own lack of self confidence holds her back. She has a particular dislike for the term "catgirl", since she felt people who refer to her as one didn't view her as an individual, but rather as just a catgirl.

She is extremely scared of the dark, a fact which she hates being brought up by the other catgirls.

Along with her catgirl sisters, Maple arrives at La Soleil to reunite with Chocola and Vanilla who have moved away to live with Kashou. There, she had a brief fight in their family's usual shenanigans. But she did get to enjoy Kashou's cakes after Shigure buys every last one of them.

Maple is called in by Shigure to help her tutor Chocola and Vanilla for their bell certification. Maple herself shows Chocola how to interact with mobile phones by browsing the internet. By the time the sessions finishes, she is shocked to see there is a massive phone bill tabbed to her.

Later, Maple becomes a maid employee at La Soleil when Shigure decided to reinforce the shop with the entire family.

Maple has an intermediate role in Nekopara Vol. 0. She's the more intellectual type in the group who is more affable with human culture.

Maple is a minor character in Nekopara Vol. 2. Like all of her catgirl sisters, she is a waitress of La Soleil. In her service, she always uses clean and polite manners to the customers.

Maple is the main heroine in Nekopara Vol. 3. In this story, she was reminded of a dream she had awhile ago and seeks to achieve it. 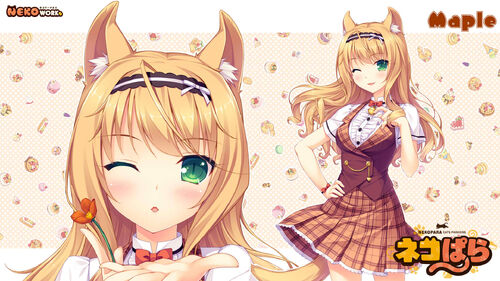 Retrieved from "https://nekopara.fandom.com/wiki/Maple?oldid=13899"
Community content is available under CC-BY-SA unless otherwise noted.