Nekopara Vol. 2 (ネコぱら Vol.2～姉妹ネコのシュクレ～ Neko Para Vol.2 ~Shimai Neko no Shukure~?) is an adult visual novel developed by Neko Works and published by Sekai Project. It is the second game in the series based on Sayori's doujinshi and catgirl works. The game is released simultaneously in Japan, North America, and Chinese in three languages on steam on February 19, 2016 while the adult version and patch is released on February 20, 2016.

Taking place after the events of Nekopara Vol. 1, this game focuses on Azuki and Coconut, while Chocola, Vanilla and the rest will have supporting roles in the story.

The featured opening theme for the game is Heart Pounding ☆ Heart ☆ Flavor and the ending theme is 100% Meow Power Nyantasy.

Business is booming for La Soleil, the patissiere run by Kashou Minaduki with his two catgirls, Chocola and Vanilla, his sister Shigure, and the Minaduki family’s four catgirl sisters.

Among them are the sarcastic oldest sister who hides behind a facade of toughness, Azuki, and the clumsy youngest sister who always tries her best even if she ends up doing more harm than good, Coconut. No one got along better than these two catgirls when they were younger, but lately, they’ve been fighting all the time.

Despite their sisterly love, a small misunderstanding ends up driving a wedge between them. As the story of these catgirl sisters unfolds, they’ll grow to understand each other and strengthen their familial bonds in this heartfelt catgirl comedy, which is only a little lewd. Now open for business![1] 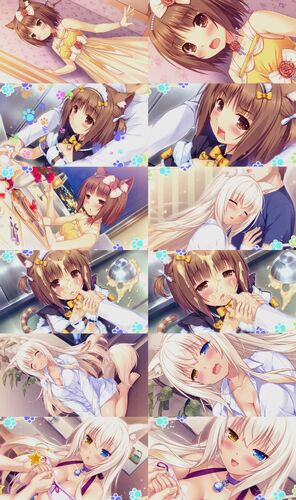 Retrieved from "https://nekopara.fandom.com/wiki/Nekopara_Vol._2?oldid=12202"
Community content is available under CC-BY-SA unless otherwise noted.