"I will always come and visit you, Nii-sama. I'll be cheering you on."
– Shigure Minaduki, NEKOPARA Vol. 1 - Chapter 3

Shigure Minaduki (水無月 時雨 Minaduki Shigure?) is Kashou’s younger sister and the Minaduki catgirls’ owner. Considerably younger than Kashou, she is deeply attached to her elder brother. She has quite the talent for business and secretly runs her own company. She can’t leave home yet, so she supports Kashou from the shadows. She sometimes gets out of control.

Shigure appears as a young girl with dark violet, shoulder-length hair and violet eyes. Her hair has flower ornaments on both sides. She typically wears a kimono with flower patterns on it and dark indigo coloured zori sandals. During working hours, she wears the La Soleil uniform with the addition of a nekomimi headband.

Shigure is an elegant and intelligent young girl. She has looked after and trained most of the Minaduki catgirls so they all earn their Bells (the only exceptions being Chocola and Vanilla, and even then they got their Bells only a short while after leaving), so she has developed a very maternal sense of pride in their achievements, as well as mother-like ways of dealing with their various shenanigans. She is always well-composed and remains very calm even when under pressure. Some of the catgirls are even terrified and creeped out when she somehow still smiles while being mad.

However, despite her intelligence and elegant appearance, she is implied to harbour an incestuous and unrequited love for Kashou, her brother, occasionally lamenting how he doesn't seem as close to her as in the past.

Nothing much is known about Shigure's early life since the fan disc is set just before the events of the original game, but it is strongly hinted that Shigure is very close to her older brother and has some incestuous feelings towards him.

Before the events of the two games, she and her brother found Chocola and Vanilla abandoned at the side of the road. The two Minaduki's decided to adopt the twins and therefore adding 2 additional catgirls to the household.

After hearing of the opening of Kashou's bakery, La Soleil, Shigure visits the place under a sketchy disguise. But she was quickly uncovered by Kashou, Chocola, and Vanilla. Soon after, the other catgirls enter the place, Shigure takes off her disguise and assumes her normal appearance. She addresses to Kashou that she has missed him for a long time and wanted to see him again. Kashou questioned on how Shigure found him; it is revealed that Chocola and Vanilla promised to get her a card from Kashou's bakery in exchange for being sent with Kashou when he moved out.

After having a brief reunion with her brother, Shigure addresses to Kashou that she needs him to get bells for Chocola and Vanilla in order for them to work as proper employees. The family catgirls then get into a brief argument but Shigure stops them by offering them all the cakes she bought from La Soleil, much to Kashou's surprise.

During La Soleil's day off, Shigure visits the shop to train Chocola and Vanilla to get their own bells. She brought in Azuki and Coconut to have them demonstrate in front of Kashou, Chocola, and Vanilla of their ability to control their cat instincts. Unfortunately, the two ultimately fail to control themselves, much to Shigure's dismay. The following afternoon, she tries to assure Kashou that the training will go smoothly by bringing in Maple and Cinnamon to tutor Chocola and Vanilla about the Bell's written exam. She then let the catgirls be with the training. While the catgirls study, she offered Kashou some tea and snacks while they wait. She also informs him that she has been helping to promote La Soleil's business by spreading the good word. She also gives Kashou some information that he will need to teach to Chocola and Vanilla for their written exam by himself.

A few days later on her next visit, she and Kashou have tea and a conversation. She was told about Chocola and Vanilla's condition while in heat and she reveals it's not possible to feel ill from their oestrous cycle, revealing to Kashou it was a lie from her. She lovingly teases with Kashou, doting on how much he loves her though he casually pushes her advances away. But importantly, she's glad to see Chocola and Vanilla happy with him now that they're his catpanions.

The day after Kashou, Chocola, and Vanilla's trip to the amusement park, she received a call from Kashou that he is feeling ill and quickly went over to care for his health. She insists on him to get some rest. He denies it at first but becomes convinced eventually. Satisfied that Kashou understands, she leaves Chocola and Vanilla in the care of Kashou and leaves the bakery.

Shigure decided to reinforce La Soleil with the rest of the catgirls and herself included. She thought that Kashou couldn't handle the workload just by having himself and Chocola and Vanilla. So in the end, she thought that by having everyone involved, Kashou would be able to work easier with everyone aboard.

Shigure has an intermediate role in Nekopara Vol. 0. As the owner of the catgirls, she ensures they are well-behaved. She also loves her brother Kashou very meaningfully.

Now an employee of La Soleil, Shigure now serves as a young waitstaff. She primarily takes the role of promoting La Soleil through ads and an online blog she created. Whenever she successfully puts her plan into motion, she would ask Kashou for a praise for being a genius.

Later in the day, Shigure becomes upset after finding that Kashou, Chocola, Vanilla, and Coconut were late after they've gone out. The catgirls apologize and run off. Kashou apologizes as well and Shigure understands him completely. Then she asks for a kiss in return as further their proof of apology. Without second thoughts, Kashou gives her a light kiss on the cheek, leaving her extremely embarrassed.

Two days later, Shigure returns to the bakery with Chocola and Vanilla after they finished their retaking their exams then continues working in La Soleil. The following night, Shigure discusses with Kashou what Catgirls do in the event of a Catpanion polygon. She comments that Catgirls do not mind with their partner having multiple relationships just as long they care for each other equally. Also noting Coconut and Azuki's relationship towards Kashou, she teases him if it might be nice if the two become his catpanion right away, though Kashou treats it like a normal conversation to his slight embarrassment.

As Shigure and the catgirls head to the bakery for another work day, Shigure discovers Coconut has slept with Kashou and immediately uncovers that she is now his 'catpanion,' to her delight. This leaves Coconut embarrassed, though Kashou assures her to not regret it. That following day, Shigure ultimately discovers Azuki did, in fact, become Kashou's catpanion to her own delight and becomes overjoyed for Kashou now has a small harem of catgirls. Despite Kashou trying to calm her down, she continues clamouring in excitement.

So Shigure and everyone prepares for another day at the bakery, still excited with Kashou's endeavours with the catgirls. 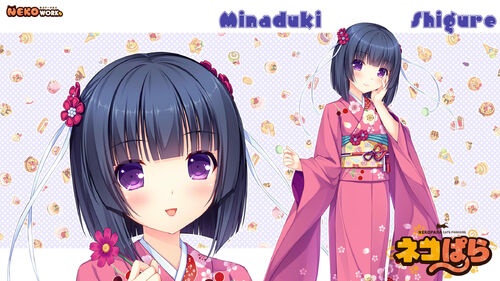